Wrap-around LED indicators for all Triumph Twins with 41mm or 47mm forks. Direct-fit around the fork tubes for radical looks.
See applications and details below.

Availability:
per version, see below

* Not suitable for Thruxton R/RS and Scrambler 1200 with reversed fork.

Description
Will totally transform and radicalise the front of your bike!
This kit allows you to fit the turn signals (in the form of an LED strip) directly on the fork tubes.

On motorcycles equipped with gaiters, simply lower the gaiters and insert the indicators between the gaiters and the triple tee for a guaranteed "invisible at rest" effect.

Manufactured in the USA.

Note: this is a kit that we import from the USA, it has not been approved for Europe. That said, the product lighting is very visible (+ than the original indicators!). 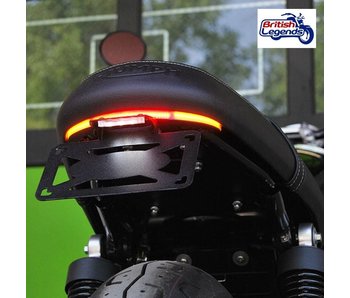 Tail tidy for a sharp and modern look at the rear of your bike. Complete kit, ready to fit.

Metal bar-end mirror with integrated LED indicator/turn signal. Symetrical design, fits RHS or LHS (or both if you take quantity = 2!) 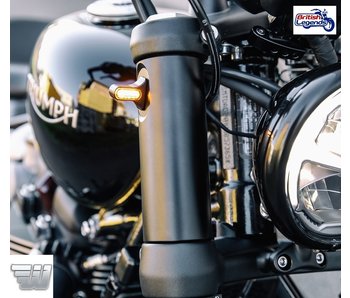 Black fork sleeves with integrated LED indicators for Triumph Bobber and Speedmaster 1200. Sold as complete kit for both sides.